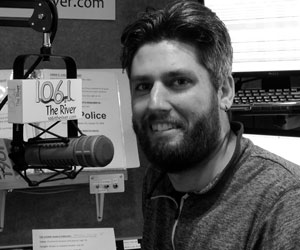 I was born in Dickson, Tennessee and graduated with the class of 2004 from Creek Wood High School. After four years of ‘discovering myself’ I went to Connecticut School of broadcasting. That led me to my first radio gig in my hometown with WDKN. Eight years later, here I am in Southeast Indiana. On January 1st I’ll be celebrating 10 years in radio and looking forward to many more with The River! 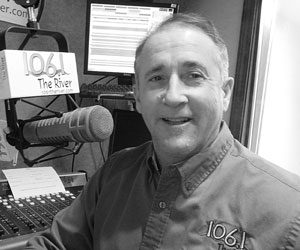 I was born in Bloomington,Indiana and did all of my major schooling there including at Bloomington North High School and 1985 graduate of Indiana University. I started my radio broadcasting career on the IU campus in the Union Building on a Free-Form station known as WQAX followed by a year on the IU station WIUS. I am celebrating my 40th anniversary of my first radio job.

I was born and raised in Grand Blanc, Michigan. I spent 8 years living in Oklahoma City before returning to Michigan and graduating from Specs Howard School Of Broadcasting Arts. I landed my first job in radio in Monticello, Indiana in 1995. After 5 years there, I spent 2 years in Lafayette before moving to Columbus in 2001. I’m married to my wife Joanne and have 3 stepkids (I don’t really call them that, they’re my kids). I have an older son, Chris in Oklahoma. I play softball 2-3 nights a week, I’ve been on the CSA board since 2007, have volunteered for the ARC of Bartholomew County and various other charities and school functions throughout the years. I never thought my home would be in Indiana but it is and I’m loving it. 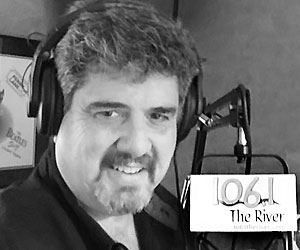 I was born right here in Columbus, Indiana. Moved to Seymour when I was 9 and graduated from Seymour High School. I am an Indiana State University graduate. Started in Radio, TV and Film and ended with a B.S. in Criminology/Pre-Law. After college served in the U.S. Army as a Criminal Investigation Division Special Agent. Just think of NCIS…just with the Army. I guess you could say that life has come around full circle for me since I lost a bet and became a weekend on-air personality for 106.1 The River. Seriously, being here has been a breath of fresh air and I do enjoy it.