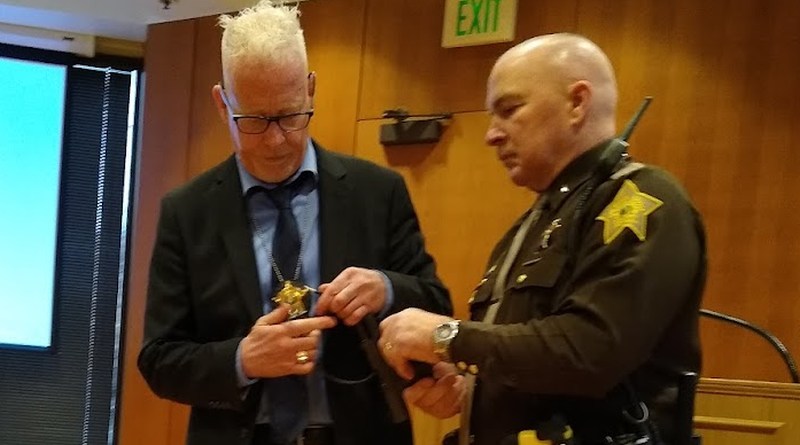 A group of concerned residents and representatives of area organizations gathered at Columbus City Hall yesterday with the mission of keeping loaded and unlocked guns out of the hands of children in the community.

The Be SMART for Kids campaign seeks to educate and encourage gun owners to make sure that all guns in homes with children are kept locked up and unloaded. Supporters of the initiative include the city and county governments and law enforcement, Columbus Regional Health, schools and businesses.

Julie Wagner, an organizer of the local Be Smart campaign, explains what the program is about:

The Bartholomew County Sheriff’s Department gave out cable gun locks at the event. Sheriff Matt Myers said that the department will be happy to deliver gun locks to anyone who needs them and will provide enough for all of an owner’s guns.

Myers talked about how in his first weeks as sheriff, a six year old in Hartsville grabbed an unlocked, loaded gun and shot his father in the chest. The man later died.

Myers said he supports the initiative so much, that he pledged to donate $5,000 from the sheriff’s department commissary funds to the effort, and asked community members to match that donation.

Moms Demand Action launched Be SMART locally to address unintentional shootings by children. The public education campaign seeks to reduce the number of shootings, suicides and homicides that come with an unsecured gun in homes with children and teens.

Dr. Kathy Smith, a local family medicine specialist and attendee yesterday, said that she is an NRA member and heads up a local guns right group for women. Normally she does not see eye-to-eye with Moms Demand Action. But on this cause, she said she is fully in agreement with this initiative.