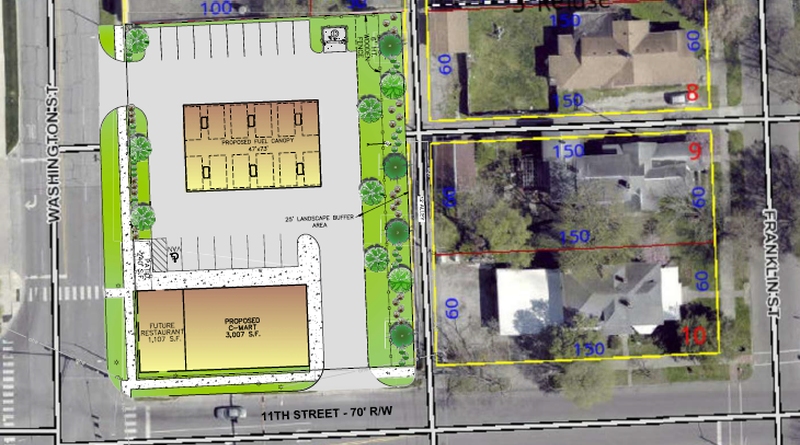 A revamped gas station, restaurant and convenience store could return to downtown Columbus after a decision this week by the city’s Board of Zoning Appeals.

The owners of the former Marathon gas station property and neighboring Downtown Grocery at 11th and Washington streets received unanimous approval from the board for a variance that would allow them to build a new facility at the location.

The existing gas station was torn down over the winter, but when the owners filed paperwork to rebuild a modern facility, they found a roadblock — the zoning in the Commercial: Neighborhood district does not allow for gas stations. And while they were grandfathered in because the previous station stood at that corner for more than 30 years and once that was torn down they could not rebuild.

The planning department staff had recommended the request be turned down because there are no peculiar conditions that limit the use of the property and there is no unnecessary hardship in a strict application of the zoning rules. However the board members decided that both criteria had been met.

GDS Petroleum, the property’s owner, submitted plans that would put the new convenience store on the very corner of 11th and Washington streets, along with room for a future restaurant. The gas pumps would be located roughly where the Downtown Grocery and its parking lot sits now. It would also include a landscaped buffer strip between the store and neighboring homes, as well as a six foot tall screening fence.